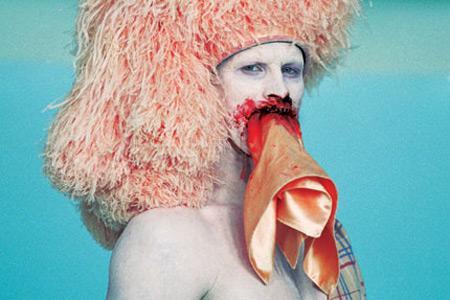 Cremaster 3 is a part of the film program:

Lodges, sects, cells, brotherhoods. The words excite and repel at the same time. We welcome you behind closed doors with a series of fascinating and disturbing films that probe into the secret communities.

CREMASTER 3  (2002) is set in New York City and narrates the construction of the Chrysler Building, which is in itself a character – host to inner, antagonistic forces at play for access to the process of (spiritual) transcendence. These factions find form in the struggle between Hiram Abiff or the Architect (played by Richard Serra), and the Entered Apprentice (played by Barney), who are both working on the building. They are reenacting the Masonic myth of Hiram Abiff, purported architect of Solomon’s Temple, who possessed knowledge of the mysteries of the universe. The murder and resurrection of Abiff are reenacted during Masonic initiation rites as the culmination of a three-part process through which a candidate progresses from the first degree of Entered Apprenticeship to the third of Master Mason.

After a prologue steeped in Celtic mythology, the narrative begins under the foundation of the partially constructed Chrysler Building. A female corpse digging her way out of a grave is the undead Gary Gilmore, protagonist of Cremaster 2. Carried out of her tomb by five boys, she is

transported to the Chrysler Building’s lobby. The pallbearers deposit her in the back seat of a Chrysler Imperial New Yorker.  During this scene, the camera cross-cuts to images of the Apprentice troweling cement over carved fuel-tank caps on the rear chassis of five 1967 Chrysler Crown Imperials, each bearing the insignia of a Cremaster episode.  Packed with cement, these caps will serve as battering rams in a demolition derby about to begin. The Apprentice then scales one of the building’s elevator shafts until reaching a car resting between floors. Using this cabin as a mold, he pours cement to cast the perfect ashlar, a symmetrically hewn stone that symbolizes moral rectitude in Masonic ritual.  By circumventing the carving process to create the perfect ashlar, the Apprentice has cheated in his rites of passage and has sabotaged the construction of the building.

The ensuing scene in the Chrysler Building’s Cloud Club bar is a slapstick routine between bartender and Apprentice. Almost everything goes wrong; and these humorous mishaps result in the bartender playing his environment like a bagpipe. The various accidents leading up to this are caused by a woman (played by Aimee Mullins) in an adjoining room, who is cutting potatoes with blades on her shoes and stuffing them under the foundation of the bar until it is no longer level – a condition that echoes the corrupted state of the tower. This interlude is interrupted by a scene shift to a racetrack, where the Apprentice is accosted by hitmen who break all his teeth in retribution for his deception. Back in the Cloud Club, he is escorted to a dental office, where he is stripped of his clothes, under which he is wearing the costume of the First Degree Masonic initiate. An apron of flesh obtrudes from his navel, referencing the lambskin aprons worn by Masonic candidates as a symbol for the state of innocence before the Fall.

The Architect confronts his opponent in the dental suite, fitting the compressed remains of the Imperial New Yorker into the Apprentice’s mouth like a pair of dentures. At that moment, the Apprentice’s intestines prolapse through his rectum. This ceremonious disembowelment symbolically separates him from his lower self. For his hubris he is simultaneously punished and redeemed by the Architect – whose own hubris, however, equally knows no bounds.

Returning to his office, and anxious about the tower’s slow progress, the Architect constructs two pillars that allude to the columns, Jachin and Boaz, designed by Abiff for Solomon’s Temple. Meanwhile, the Apprentice escapes from the dental lab and climbs to the top of the tower. The Architect uses his columns as a ladder and climbs through an oculus in the ceiling. The next scene describes an apotheosis, the Architect becoming one with his design, as the tower itself is transformed into a maypole.

At this point in the narrative the film pauses for a choric interlude, which rehearses the initiation rites of the Masonic fraternity through allegorical representations of the five-part Cremaster cycle, all in the guise of a game staged in the Guggenheim Museum. Called “The Order,” this competition features a fantastical incarnation of the Apprentice as its sole contestant, who must overcome obstacles on each level of the museum’s spiraling rotunda.

In the ensuing scene, which returns to the top of the Chrysler Building, the Architect is murdered by the Apprentice, who is then killed by the tower. Both men have been punished for their hubris and the building will remain unfinished. The film ends with a coda that links it to Cremaster 4. This is the legend of Fionn MacCumhail, which describes the formation of the Isle of Man, where the next installment of the Cremaster cycle will take place.

If you disable this cookie, we will not be able to save your preferences. This means that every time you visit this website you will need to enable or disable cookies again.